The Universidade de Caxias do Sul (or UCS, pronounced ooks, like a caveman would) is my home away from home away from home. It’s actually huge, home to 38,000 students sprawled across eight campuses throughout the region. It has an aquarium and a zoo, a museum and an orchestra, and snazzy promos that wouldn’t look out of place among those university advertisements you see during college basketball games.

It’s also the center of my life here. I’m living in Caxias because one of the English professors at UCS, our coordinator Maria Valésia, applied to have us come teach. Our host moms all work at UCS, and most of the people we’ve been meeting have been UCS students, faculty, and staff. It’s great to have so much support, but it also means that the line between the personal and the professional here is a little thinner than I’m used to. (So far, in my experience, that’s been ultimately a good thing.)

We started teaching classes a couple weeks ago—and by “teaching” I mean “being present for and leading some activities during.” (We’re always in the classroom with the course’s professor.) The school year runs from March to December, and we’ll be in these classes until the semester break in July. The four courses I’m teaching are:

As you can see, all my classes are in the evening or night. There are people around during the day, but night is when the campus comes alive. Because a lot of students work during the day and/or commute from surrounding cities, campus doesn’t really get busy until 6:30 or 7:00. But working and then commuting and then studying makes for a long day, so that 10:30 end time tend to be pretty soft. It’s not uncommon to get out around ten (when students just start to pick up and leave anyway) to allow time for everyone to get home.

UCS’s fancy theater (where last month I saw a concert given by, for some reason, an orchestra from the University of Northern Iowa)

In addition to teaching, I’m also a student here! We’re allowed to take up to three courses for free, so I initially signed up for Intercultural Communication, a business class that was taught in English. It was different from what I expected—the few classes I attended consisted of re-reading sections of our homework texts in order to present on them to the rest of the class. Not all of my classmates had a good grasp of English, and I think the professor himself was only asked to take on the course because he studies business and knows the language. It’s a tough situation to teach in, but I ended up dropping the class in order to begin assisting a fourth English course instead.

I’m definitely learning more in the classes I teach, though. They’re almost exclusively for students who want to become English teachers themselves, which means I’m getting some tips on pedagogy. For example, in Oral and Written Skills for Teachers last week, I learned about the importance of cutting Teacher Talking Time (TTT) and establishing a teacher voice. And then Functional Grammar and Discourse Analysis is basically a straight-up linguistics course, which I’ve always wanted to take.

Additionally, there’s just the fun of seeing English from a non-native speaker’s point of view. There are so many rules I’ve never had to learn, and I think it’s super interesting to learn what sort of knowledge I just take for granted. For example, there are verbs in English that don’t take a present progressive, like need, hate, believe, mean, and know. Native English speakers don’t say “I am needing a drink” or “they are knowing how to get there;” we just use the simple present instead. It’s a lesson that everyone in my English V class could tell me, but one I’d never encountered in my life.

Speaking of Portuguese, we’ve also begun our Portuguese class. During our first class last week (consisting of me and two other ETAs), I was pleasantly surprised when our professor spent the entire time conversing with us because we were too advanced for the material she’d prepared. That’s not to say we’re advanced—I still don’t really know all the conjugations I need to use on a daily basis—but I’ve picked up a lot living with Elaine, and my background in Spanish and Italian helps with comprehension. I’m excited for the class to help me fill in the gaps. 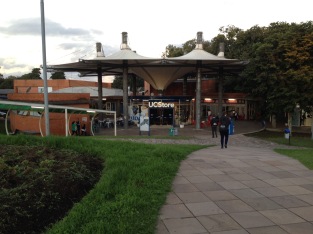 But as I mentioned earlier, for us ETAs, the line between the personal and the professional isn’t well defined. I communicate with my professors mainly over WhatsApp, where they send me hearts and kisses and random pictures. If I’m hanging out with Maria Valésia, we might spend some time discussing our class; and if we’re class, we might talk about plans to see each other on the weekend. If I have some time to spare between meetings, I might go visit my host mom in the ombudsman’s office (which is apparently how you translate that), or pop into the international exchange center to say hi to the staff there.

The blurring of the personal and professional is something we discuss at our Orientation—generally speaking, the two are far less discrete in Brazil than they are in the States. I was worried I would find that invasive or stifling, but so far that hasn’t been the case. Maybe it’s because I’ve found myself among a lot of like-minded people—you know, English professors—but I find myself feeling welcomed and valued when my colleagues take an earnest interest in my life outside the classroom.

Admittedly, I can see how this expectation of closeness might get exhausting if I had to interact with an office full of people each day, or if I needed to regularly negotiate relationships with people I disliked. But I can also see how this closeness could make it easier to empathize with people, accept others, and be easier on ourselves—especially in the workplace. If we can see each other primarily as people, maybe we can better recognize and respect our own needs, too.

This is not an official Fulbright Program site. The views expressed on this site are entirely mine and do not represent the views of the Fulbright Program, the U.S. Department of State or any of its partner organizations.