If you’ve been following any international news over the past couple weeks, you probably heard about the truckers’ strike here. According to international news outlets, the strike “paralyzed” and “crippled” Brazil, bringing the economy to “a grinding halt.” From May 21 to May 31, truckers throughout the country blocked roads and refused to transport their goods. Estimates of the immediate and long-term costs of this strike vary, but they all range in the billions of US dollars.

Those ten days were certainly an interesting time to be in Brazil. But what was perhaps most interesting were the disparities I saw between this international coverage and my own experiences in Caxias. Granted, I’m no expert on Brazil—at best, I’m a half-informed interloper—but I could at least realize that a lot of this coverage felt… wrong.

Both the US and Brazil are reckoning with fake news. It’s something I’ve spent a significant amount of time researching and talking about here. To be clear: I don’t think the coverage I’ve been reading is fake. But I do think the discrepancies I’ve observed point to the limitations of journalism—and I think an awareness of these limitations can also help inform discussions about fake news in the United States.

One stretch of the truckers’ protest. Photo c/o Pioneiro

So here are my experiences with the strike in Caxias: gas stations ran out of fuel by the morning of May 25. Public transportation was reduced, schools (including UCS) canceled classes, and some restaurants closed for lack of cooking gas. My local supermarket ran out of eggs, fresh meat, a lot of the bread, much of the produce, and all of the non-risotto rice, but otherwise reported having enough food for two weeks. Meanwhile, my Brazilian friends shared memes on Facebook joking about living in the world of The Walking Dead.

I didn’t actually hear about the strike until a few days into it, right around the time that people started queuing up for blocks to wait for gasoline. It seemed like everyone in my social circles approved of it—the general impression I got was that something needed to be done about the state of Brazil, and the truckers were finally the ones doing it. Any inconvenience people experienced seemed to be quietly endured as an act of solidarity with the strikers. The people frantically trying to stock up on things (or take advantage of increased demand to price-gouge) were criticized as undermining the point of the strike.

So when I read headlines like ABC’s “Free market vs subsidies at heart of Brazil truckers’ strike,” I get confused. Because no one here seemed to be talking about the relative values of the free market and subsidies; the complaints I heard were that gasoline taxes were too high and oil execs/politicians too rich. And much of the popular support for the protest seemed to draw on general discontent with and distrust of the government—not abstract points about economic policy. My experiences here and this news article appeared to be reflecting two completely different narratives.

Things got more complicated when some truckers used the strike as a platform to call for a return to Brazil’s military dictatorship. People were shocked—partly because the truckers had previously been seen as such heroes, and partly because the dictatorship was so violent and repressive that’s it’s hard to understand why anyone would want it back. Make Brazil great again, I guess.

The military dictatorship lasted from 1964 to 1985 (!), and like many other dictatorships in South America, it was supported by the US and praised as anti-communist. Its various human rights abuses have been chronicled in a 2,000-page report delivered by Brazil’s (admittedly Orwellian-sounding) National Truth Commission. But glibness aside, the best understanding I have is that the people calling for military intervention feel like they were not harmed by the dictatorship, and generally seem to be of the opinion that you have nothing to lose if you have nothing to hide. And considering Brazil’s levels of crime and corruption, I can understand why that approach might be attractive.

But amidst these calls for military intervention, I never heard anyone call for a coup. As a result, it actually took me a few moments to parse Reuters’ headline of “Brazil’s Temer downplays threat of coup amid truckers’ protest.” To me, military intervention sounds completely different from a coup—a coup is a violent overthrow of one system of government for another, whereas military intervention is a temporary measure to help Brazil resolve its current problems. And I think it’s the latter that people want—a cast or a sling rather than a full-blown amputation.

Regardless, people calling for a military coup are a definite minority of both truckers and the larger population—a fact outright mistaken by Al Jazeera. (Although it’s possible their coverage was simply limited to one protest; the reporting is not immediately clear.) 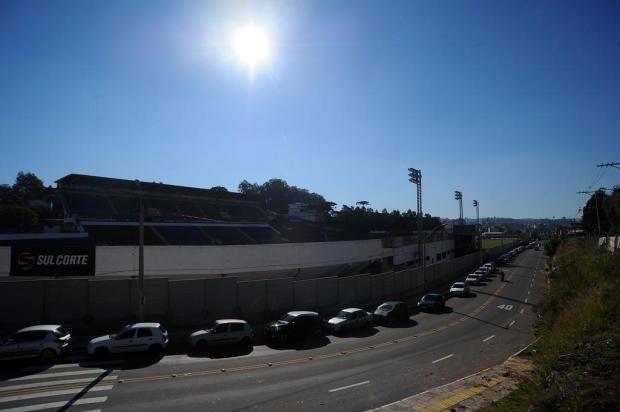 Cars lined up for gas in Caxias. Photo c/o Pioneiro

So, at least from my (limited) perspective, some of the international coverage of the truckers’ strike reflected a different narrative than I’d experienced. Although definitely affected, life in Caxias didn’t grind to a halt. And the majority of people I knew seemed to support the strike as a statement of frustration with the government, not as a specific economic commentary or a plea for violent military takeover.

But at the same time, I don’t think these are in any way fake news. Each of these articles tells a part of the story, filtered through a lens of experience. If I were a farmer and had to cull tens of thousands of animals, maybe I’d think the strike was crippling, too. And I think, technically speaking, the ABC article was right—subsidies are at the heart of the current price of gasoline, if not popular support for the strike. And maybe the author behind the Reuters article had thought the military intervention called for by some of the strikers was best described (technically or otherwise) by the word “coup.”

Any journalist, at best, can only tell part of a story. To paraphrase Susan Sontag: to write is to frame, and to frame is to exclude. Certainly, good journalism will strive to include comprehensive detail and robust coverage, in order to depict a situation as accurately as possible. But at the same time, I think we have to acknowledge that true accuracy is impossible—that any description is inherently an analysis (because by describing something we are judging which details are worthy of inclusion), and that our analyses are based on our experiences, which color the way that we see the world.

This is what I think is missing in discussions about fake news in the US: a recognition that we don’t discover meaning so much as we create it. And as a result, we constantly struggle over meaning—how to make sense of this physical world we all share. For example, we don’t even agree on what the term “fake news” means. I’d use it to refer to baldly fraudulent “news” articles that were written to capture advertising revenue, but I also see our president spearheading a movement to use it to describe news reports one disagrees with.

And even then, people will disagree over my characterization of fake news as “what one disagrees with.” We’re going to argue over what we see as true. And to a certain extent, that’s okay—having a perspective is a fundamental aspect of being human. But what I think is troubling is that we throw around the term “fake news” without recognizing that all news is manufactured by people and thus unable to escape some bias.

Or, you know, just reports on a different part of the story than the one you experienced.

This is not an official Fulbright Program site. The views expressed on this site are entirely mine and do not represent the views of the Fulbright Program, the U.S. Department of State or any of its partner organizations.